The specific role that you will play and the activities in which you will participate will depend upon your background, interests and skills, as well as the needs of the NVMRC unit and the community.

Following past storms, it was recognized that there is a major need to enhance response efforts involving shelter staffing and operations. Therefore, shelter operations will be a top training priority for the NVMRC unit.  Other priority areas include: mass dispensing operations, psychological first aid, family assistance center training, among other topics which help promote community resiliency.

All volunteers will be provided the necessary training in order to be prepared for activation and response to real-world events. You will never be asked to perform a task you are not trained for or do not feel comfortable performing.

Don't let the word "medical" in our name fool you!

The Naugatuck Valley Medical Reserve Corps (NVMRC) is a volunteer unit comprised of individuals with both medical and non-medical backgrounds.  Our volunteers live and/or work within the jurisdiction served by the Naugatuck Valley Health District (Ansonia, Beacon Falls, Derby, Naugatuck, Shelton, and Seymour, CT).

New recruits are always welcome!  If you know someone who might be interested in volunteering, bring them along to our next meeting or event!

*Volunteers must be 18 years or older. 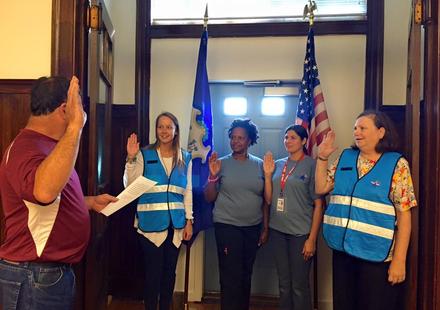 What role will I play? 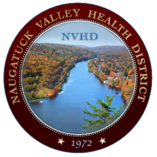 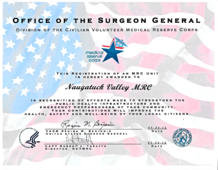 Title 28 in the Connecticut General State Statues that protects active members of the MRC during real emergency events as well as approved MRC training events.

Under Title 28 of the Connecticut General Statutes, specifically 28-1(5), Medical Reserve Corps members under the auspices of the state Department of Public Health are considered "civil preparedness force" members "while engaging in authorized civil preparedness duty or while assisting or engaging in authorized training, for the purpose of eligibility for immunity from liability as provided in 28-13 and for death, disability and injury benefits as provided in 28-14" (CT DEMHS, 2010)

This is why it is important for all NVMRC volunteers to participate in the administration of the oath (being sworn in) and to RSVP or preregister when requested by set deadline(s).

Amanda is the Public Health Emergency Preparedness and Medical Reserve Corps Coordinator at the Naugatuck Valley Health District and began the role as the NVMRC Unit Leader in 2021. Prior to becoming the PHEP and MRC Coordinator, she was a NVHD Contact Tracer. She earned her Bachelor of Science in Public Health from Southern Connecticut State University in 2020. Her degree has provided her with the foundation and basic knowledge of; community & environmental health, illness & disease, emergency response, and the skills to support the health of those in the community. During her college experience she was fortunate to gain experience as a student intern working in diverse populations, group programs, and conducting outreach activities.

Amanda has been an active member of the community; in high school, she volunteered at her local school districts as a youth mentor and was a volunteer student dem for Seymour Pop Warner. In college, she continued to volunteer for Seymour Pop Warner and started as a volunteer for a Seymour Unified Team, which she is still currently involved in. When Amanda started at NVHD as a Contact Tracer, she was determined to help the community in the fight against the COVID-19 pandemic. After learning about the Naugatuck Valley MRC, she decided to become a member and immediately began volunteering at COVID-19 vaccine clinics!

"I have always strived to find ways to get involved in the community. Throughout my years as a volunteer; each experience has been different and rewarding in many ways; I have met new people, developed new skills, and I have helped make a difference in my community! I hope you will join us in the effort to promote public health initiatives, prepare our communities response to emergencies, and enhance the health and safety of those in the community!"

The Medical Reserve Corps (MRC) is a national network of volunteers that began in 2002. Following the attacks of September 11, 2001, in his January 2002 State of the Union address, President Bush asked all Americans to offer meaningful volunteer service in their communities, in whatever ways they could.

To support this effort, Secretary of Health and Human Services Tommy G. Thompson officially launched the MRC in July 2002.  Congress allocated funds to establish the MRC Program Office in the U.S. Surgeon General’s Office to initiate an MRC demonstration project and to provide national technical assistance.  The National MRC Program is now housed under the Partner Readiness and Emergency Programs (PREP) Division within the Office of Emergency Management (OEM), Assistant Secretary for Preparedness and Response (ASPR), U.S. Department of Health and Human Services (HHS).

Since the MRC initiative began in 2002, units have been formed in every state and most U.S. terrorities, and thousands of individuals have signed up or have expressed interest in volunteering. Local communities also have worked diligently and creatively to establish the foundation of community support and planning necessary for their units to function effectively. MRC units are community based and function as a way to locally organize and utilize volunteers who want to donate their time and expertise to prepare for and respond to emergencies, and promote safety among their communities.

Jessica is the Director of Health of the Naugatuck Valley Health District, the housing organization of the NVMRC and has lead the NVMRC since 2014.  Prior to becoming Director, she was the NVHD Public Health Emergency Preparedness Coordinator and NVMRC Coordinator.  She earned her Bachelor of Science in Safety Studies and a minor in Criminal Justice from Keene State College in 2011. In 2016, she earned her Master of Public Health degree in Environmental Health Science along with a Graduate Certificate in Emergency Preparedness from New York Medical College.

Jess has been involved with the Medical Reserve Corps since 2011 when she joined the leadership team for her hometown unit.  "Giving back to the community has always been important to me. In high school, I volunteered as a youth mentor through a Boys & Girls Club and still to this day I volunteer at a local animal hospital. The Medical Reserve Corps program really grabbed my attention when I came home from college -it didn't matter what my background was,  I was provided all the training I needed to be apart of a solid group of like-minded individuals who understands the importance of supporting emergency preparedness and response efforts in our community. I signed up and haven't looked back! I hope you will join me!"

About the Medical Reserve Corps

"Volunteering can give the great satisfaction of helping others. For many individuals, volunteering gives them a sense of purpose and meaning in their lives. It helps to broaden their social networks, and that can have many positive effects. Volunteering provides opportunities for social interactions with fellow volunteers while supporting an important activity in the community. Interacting with others with a common interest is also a great way to create new relationships.

Volunteering can also have a significant effect on your own health. Research presented by the Corporation for National and Community Service shows a strong relationship between volunteering and health: those who volunteer have lower mortality rates, greater functional ability, and lower rates of depression later in life than those who do not volunteer.

The Health Benefits of Volunteering: A Review of Recent Research

MRC: Why Should I Volunteer? 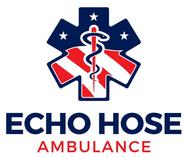